The “Notorious RBG” opened the doors for those who followed after her.

From being the first female member of the Harvard Law Review to her stunning 27-year tenure on the Supreme Court as the first Jewish woman (and second woman) to be appointed, Ruth Bader Ginsburg's life as a trailblazer continuously defied the odds set against her. Known affectionately as “Notorious RBG,” Ginsburg championed women's rights, gender equality, and LGBT+ rights throughout her more than 50 years in the American Judicial System.

Born on March 15, 1933 in Brooklyn, New York, Ginsburg excelled in school throughout her educational career. She graduated from Cornell University in 1954, finishing at the top of her class. She married Martin D. Ginsburg, a law student, that same year.

She then attended Harvard Law School as one of only nine women in the 500-person class, where she was famously known for taking notes for her husband, who was diagnosed with testicular cancer in 1956. She maintained her own position at the top of the class — on top of being a mother and the first female member of the Harvard Law Review.

When her husband got a job in New York, she transferred to Columbia University, where she was added to the Columbia Law Review and graduated first in her class in 1959.

Yet, despite her more than impressive portfolio up to this point, Ginsburg had trouble getting a job within the male-dominated industry. If it wasn't for one of her professors, she may not have begun her career clerking under U.S. District Judge Edmund L. Palmieri. She continued her career by teaching at Rutgers University School of Law and then Columbia Law School, where she became the school's first tenured female professor, among other roles.

During this time, Ginsburg also headed the Women's Rights Project for the ACLU, where she took a broad look at gender discrimination, fighting not just for the women left behind but also for the men who were discriminated against in cases such as Reed v. Reed (1971). From there, she was appointed by President Carter to the United States Court of Appeals for the District of Columbia, where she served until her 1993 appointment to the Supreme Court under the Clinton administration.

Ginsburg would serve wholeheartedly up until her death. Until the 2018 term, Ginsburg had not missed a day of oral arguments — not even when she was undergoing chemotherapy for pancreatic cancer, after surgery for colon cancer, or the day after her husband passed away in 2010. In this time, she became famous for her dissents in cases such as Ledbetter v. Goodyear Tire & Rubber Company (2007) and Burwell v. Hobby Lobby Stores (2014), as well as being the first Supreme Court Justice to officiate a same-sex wedding.

Ginsburg also became a pop-culture icon after “The Notorious RBG” memes were made popular by a Tumblr account of the same name, as well as the publication of a book titled “Notorious RBG: The Life and Times of Ruth Bader Ginsburg” by Irin Carmon and Shana Knizhnik. She was also known for her workout regimen; she could do 30 push-ups well into her 80s and at one point benched more than some of her colleagues.

So, how does such an illustrious career fit in a resume? That's what our writer, Traci, set out to do. Since there is so much that can be covered, Traci created a broad retrospective of Justice Ginsburg's career and impacts on civil rights and gender equality. 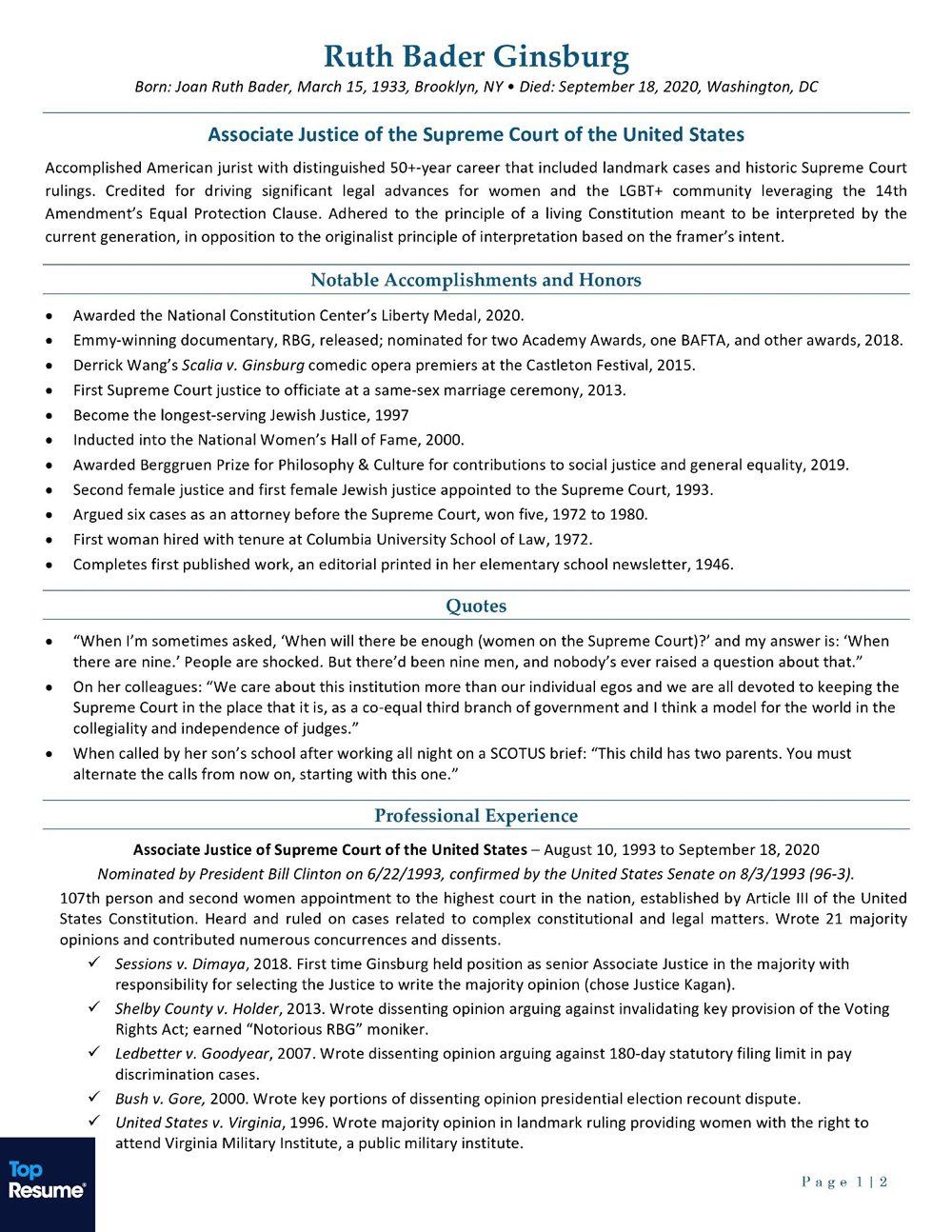 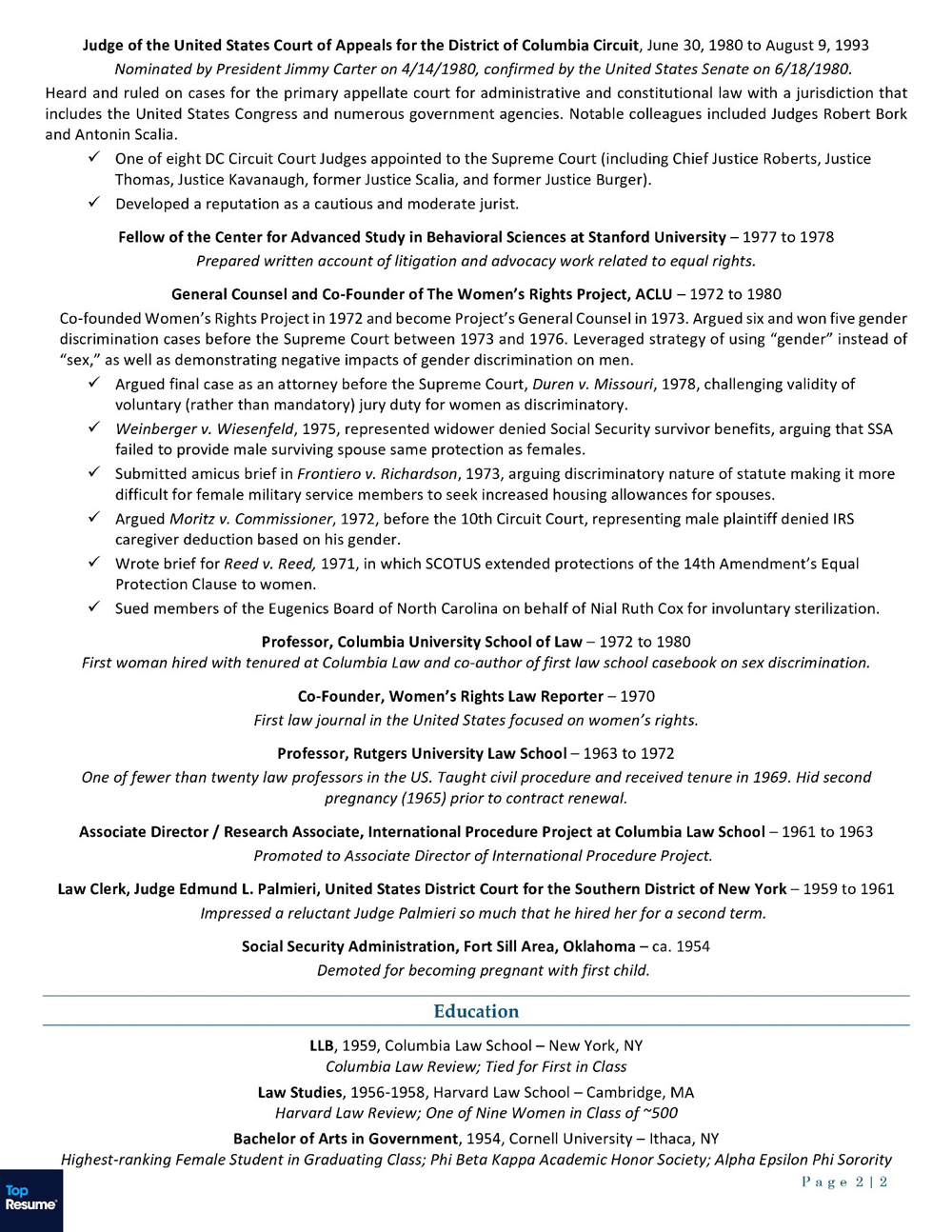 You need a resume that will showcase your achievements, just like Ginsburg's. Our professional resume writers can help!