As Meghan Markle gets ready to move into Buckingham Palace and sip tea with the Queen, she will need a brand-new CV — and we have her covered.

While most people know her as Rachel Zane on “Suits” and for her cameos in Get Him To The Greek and Horrible Bosses, and now as the American who stole Prince Harry's heart, Meghan Markle's impressive career includes so much more than what you see on TV.

From delivering an amazingly feminist speech as a women's advocate for the UN to visiting Rwanda and India as a global ambassador for World Vision Canada and the Clean Water Campaign, Markle isn't afraid to share her thoughts and speak out against racial and gender inequality. She even wrote letters as a child to then First Lady Hillary Clinton, TV journalist Linda Ellerbee, and attorney Gloria Allred about the misogynistic line, “Women all over America are fighting greasy pots and pans,” in a dish soap commercial — and her efforts got the company to change the tagline.

Markle has also penned articles on her experiences with the UN for Elle UK, wrote about how periods affect girls in India who don't have access to sanitary pads and thus stopped them from going to school, and created her own lifestyle blog aimed at empowering women called “The Tig.”

In honor of Meghan Markle and Prince Harry's upcoming wedding, we asked TC Paulson, senior staff writer for our sister site TopCV, to convert Ms. Markle's resume into a European CV for her transatlantic move to the U.K. Paulson opted to position her as a Humanitarian Advocate based on the fact that, aside from being an actress, the majority of Markle's additional experience lies in charity and humanitarian work and she has said that she will leave acting to focus on philanthropy once she's married.

Below is Markle's newly-created CV. We invite you to take a closer look at the career that makes Ms. Markle so much more than just the new American princess. 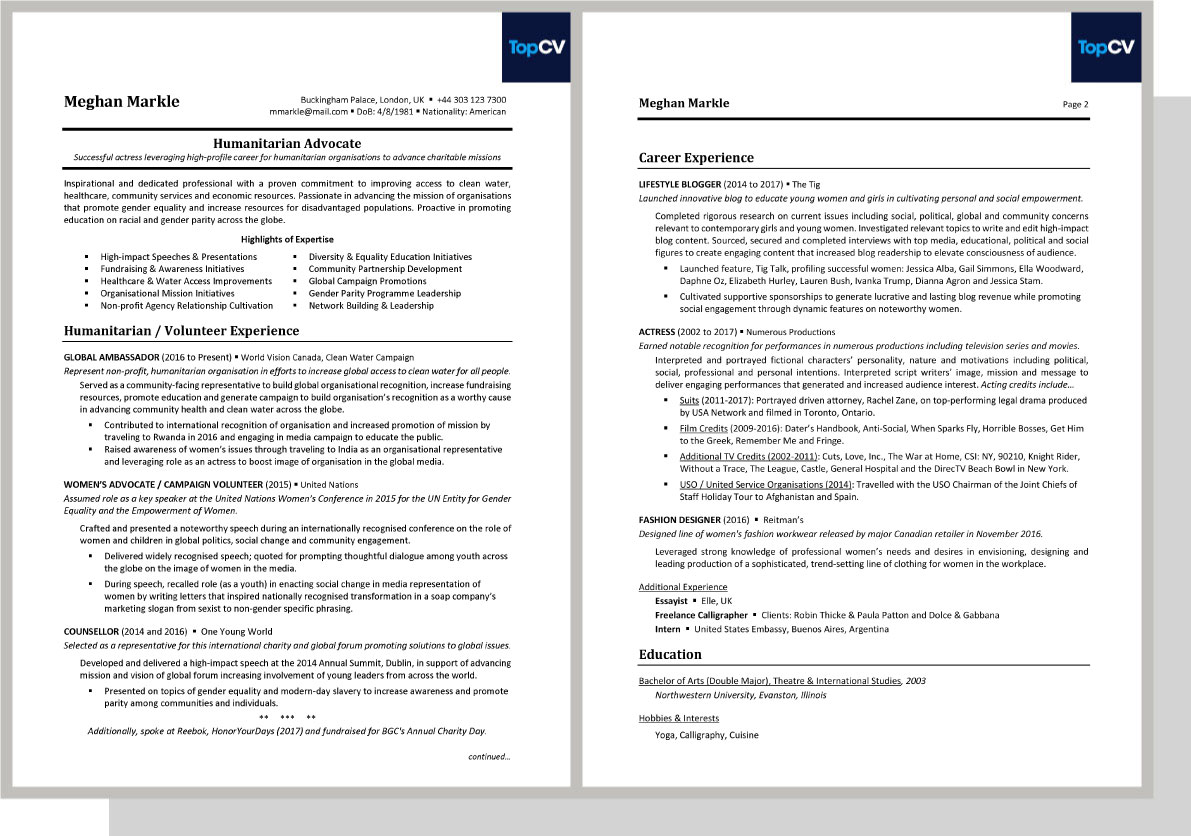 Click on the following link for more resume and career advice.

Looking to make the big leap and move across the pond, but need to update your resume to a CV? Check out our sister site TopCV's CV-writing services.

How We Helped This Jane of All Trades Focus Her Resume

Changing Careers? 7 Details to Include on Your Resume